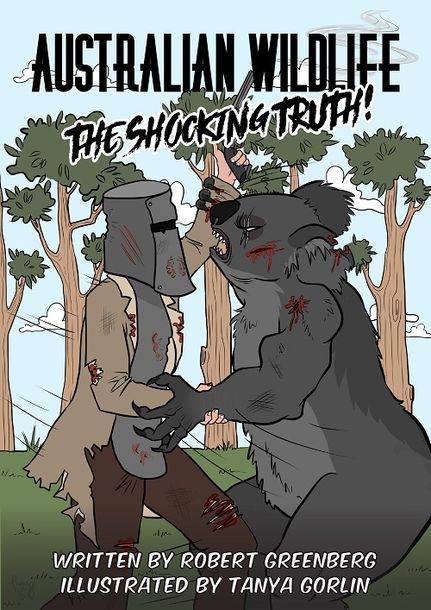 "Australian Wildlife, The Shocking Truth!"
As we all know everything in Australia will kill you! Whether it grows, swims, flies, crawls, slithers, hops or glides etc; it will either kill you, kill you then eat you, “violate” you kill you then eat you, or just settle for laying its eggs in your brain!
This shocking fully illustrated reveals all!

"The Funnel-web Spider."
The Funnel-web Spider has always been the Jekyll and Hyde of Australian arachnids. It is very large, (though smaller than other Australian species) very ugly, highly venomous and sometimes aggressive. However, it also possess one of the sweetest and most melodic singing voices of the entire insect kingdom and are generally jolly and good natured when they’re not busy killing something.
It’s a real treat hearing them every Spring and Summer morning singing away joyfully from the tops of fences and roofs across suburbia, greeting the sun with their light hearted tunes before scurrying away back to their cosy burrows. You can also often hear them warbling a merry little refrain to itself as it carries off someone’s cat or Schnauzer (its favourite treat) down into its lair.
It’s hard not to love them!
There are 40 different species of Funnel Web Spider such as the Bankstown Blue, Southern Fluffy, Melbourne Green Silky, the Royal Northern Tiger and the Red-banded Jumping Goliath as well as a wide variety of “boutique” hybrids like the Gorgeous Baboon and the very popular Springer Roughie and Hungry Mo to name but a few.
Most breeds can be domesticated after a fashion and the display hosted by the Australian Funnel Web Breeders Society at the Sydney Royal Easter Show is always well attended with the petting zoo being a popular Easter treat for kiddies of all ages. However, due to some unfortunate past experiences, the event is always scheduled so it doesn’t coincide with important dog, cat or reptile shows...
(Pic)
In this image we have Mrs Mary Pock of Narrabeen on Sydney’s beautiful Northern Beaches receiving the Grand Champion’s prize at the 2019 Australasian nationals with her famous pure bred, Sydney Black, “Harold” named after her late husband.
Mrs Pock has also lost three cats and two dogs to her hobby but as she says with a twinkle in her eye, “Why just have two or four legs scuttling about the house when you can enjoy eight!”

"The Paper Wasp."
The average Australian Paper Wasp has a wing span of up to 30cm and are capable of carrying off small cats and dogs to feed their young.
Although an aggressive and frightening looking insect with a vicious sting, they are highly susceptible to any common household insecticide or Tennis racket…
(Pic)
And poor Mr Fluffy Bum was never seen or heard from again.

"The Waratah."
The Waratah can grow to weigh as much as a Ton and is the largest most voracious of all the worlds carnivorous plants with long, highly sensitive, sinewy creepers that spread out in all directions from the main “flower” and can grow to a length of over fifty meters. These muscular tendrils can lie passively in wait or actively seek out prey to feed its enormous appetite.
It also emits powerful and enticing pheromones that are irresistible to almost all animals and insects and draws them in from kilometres around to meet their eventual doom.
(Pic)
Once caught, few ever escape.

"The Sugar Glider."
Small, furry, mischievous and endearing, the Sugar Glider is as dangerous as they are sweet and delightfully cute!
Omnivores by nature and preferring the nectar of flowers as well as the odd grass hopper, they become voracious carnivores during the mating season. Always on the hunt for easy prey and woe-betide anyone blundering into their nesting sites during this time!
The alpha male or “Bull” normally leads a typical Sugar Glider attack. Silently leaping out of the trees, the ‘Bull’ will smother the mouth and nose of the victim in the folds of its wings in an attempt to smother them. He is rapidly followed by his “harem” who swiftly glide down and latch onto the victim’s body, securing any limbs so their prey is unable to move, run or defend themselves. Once this is done there is little chance of escape and the victim could be described as basically being ‘cuddled’ to death.
(Pic)
What the sugar glider lacks in size and strength it makes up for in numbers and aggression.


And many many more!
Go to Boolarong Press to place your order,
https://www.boolarongpress.com.au/product/australian-wildlife/