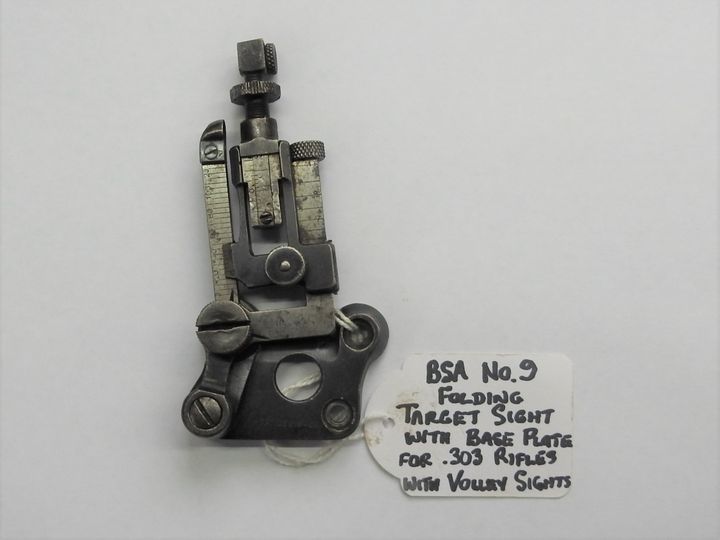 This B.S.A. No. 9 folding target aperture sight was designed and built in the late 19th century to fit the British "Long Tom" bolt action Enfield .303 rifles. It markedly improves the rifle's ability to be used more proficiently for the sport of long-range target shooting. This sight is fully elevation and windage adjustable to a large degree. I would presume the elevation graduations are more applicable to the Mk. VI .303 round loaded with the 215 round nose projectile.

It replaces the original rear folding volley sight by incorporating a similar sight into it while also adding the features of a fully elevation and windage adjustable target aperture sight as well. By doing so, all the advantages of the ultra long-range volley sight are still retained as well.

The whole assembly can be folded down alongside the receiver to allow the use of the conventional barrel mounted open rear sight as usual.

This sight has been cleaned and carefully checked and oiled. It is fully functional. The sight bears some cosmetic marks displaying its age that would only help it match in well with most rifles it would be proposed to fit it to.

NB. The forward tilt of the sight is normal .... and is intended to compensate for the rifle's elevation when being used at longer ranges.
This sight can also be mounted directly to the rifle, without using the mounting plate; in place of the original rear volley sight which then locates the sight in a more rearward position closer to the shooter's eye.

Shotgun + Ammo for Sale OR swap