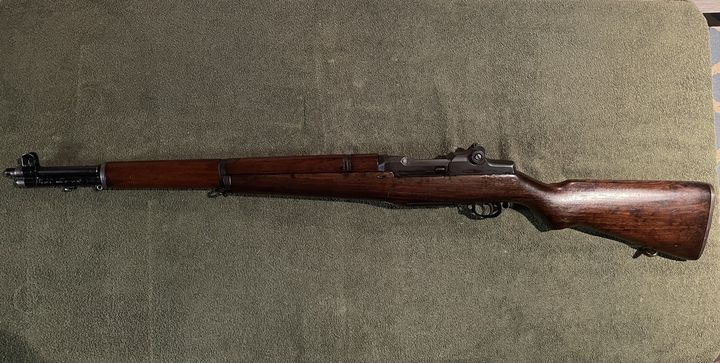 WWII 1941 Springfield M1 Garand
comes with a couple of En Bloc Clips..." gat gat gat gat...PING"
Some proof markings scattered around the rifle.
From serial number search this was manufactured by SA Springfield Armoury. There is one "P" on the inside bottom stock of the hand grip which looks to be a "Pre war" proof mark.
At some point after this rifle had seen some action after 1945 it looks like it was returned to the ordnance school for an overhaul or repairs to the Raritan Arsenal as they have there stamp on one side of the stock "RA". This would have been for the post WWII overhaul and Raritan Arsenal ended there overhauling in 1950. But it looks like this rifle could of possibly been around a bit as the other side of the stock indicates another post war ordnance stamp with "A.A" and a serial number which is the Augusta Arsenal. This tells me it COULD be possible the rifle was taken to Korea 1950 - 1953 and another post war overhaul done on the rifle from Augusta Arsenal. Augusta Arsenal shut down around 1955.